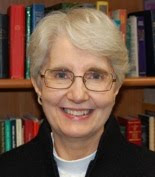 On Thanksgiving Monday, my husband and I decided to go to the Royal Ontario Museum in Toronto to see the Dead Sea Scrolls. We were fortunate that the traffic was light and the crowds were small, even though there was a special limited exhibit of the scroll of the Ten Commandments. The exhibits are very well presented with extensive displays about the region around the Dead Sea where the scrolls were discovered, and the political and cultural context of the time period.

I suppose someone could look at these brown fragments of ancient parchment with black writing and wonder, why all the fuss? Why such anxiety about preserving these bits of parchment? Why all the excitement about their discovery? Why the political disputes over ownership and control? Someone else could look at these fragments of ancient parchment and see the struggle of humanity to understand our relationship with God.

These fragments tell us that people in an age thousands of years ago turned to the same body of scriptures for inspiration that we read today, and yet these bits of parchment say different things to different people. I am amazed at their antiquity. To me, they represent the eternal wonder and search for God, which transcends nations, cultures and civilizations. Unfortunately, I cannot read Hebrew, but someone who has that ability would be able to compare the words and phrases in the scrolls to their own Hebrew Bibles and experience the link of faith over centuries. Someone of the Jewish race and faith would feel the link with their Jewish ancestors, who cherished these scrolls.

When people gaze at the scrolls, what do they see? Do they see only the past, or do they see something ancient, which speaks to us today? We see not only with our eyes, but also with our minds, our imaginations and with our spiritual awareness. In the ancient world, prophets were often called seers, not only because they might see into the future, but also because they could see the divine presence in the ordinary world. They could see significance and meaning beyond the visible reality.

We often use the verbs to see and to understand as synonymous. We might say to someone, ‘Do you see?’, when we really are asking, ‘Do you understand?’. And conversely, we might say, ‘Are you blind?’, when we really mean, ‘Don’t you understand?’. The link between blindness and lack of understanding was an ancient concept, which we find often in the Bible. A person who was blind was mistakenly believed to be incapable of understanding the world around him because he could not see that world. A blind man was regarded as useless because he could not do meaningful work, so he became a beggar. However, sometimes a blind man developed perception and insight, almost as if these gifts were compensation for the lack of physical sight.

We see an example of this in our gospel story. Bartimeus is a blind beggar. His blindness has relegated him to the dust of the road. He is dismissed as ignorant as well as helpless, and an outcast from the social order. To many, he is a nuisance and they try to stifle his cry for help. The people around Jesus can see Jesus, the preacher from Nazareth, but do they understand who Jesus is? Bartimeus cannot see Jesus, but he knows who Jesus is. He calls out, ‘Jesus, Son of David, have mercy on me’. To call Jesus, Son of David, was to name Jesus the Messiah. The title, Son of David, was both political and divine. It signified the anointed one of God, who also was the rightful king of the Jews. Blind Bartimeus knew that the Jesus he could not see was the long-awaited Messiah. He had the gift of insight into the true identity of Jesus.

That word, ‘insight’, is so very appropriate to this story. Bartimeus did not have the ability to see out into the world, but he did have the ability to see into the presence of God in Jesus. Bartimeus had faith in God’s mercy and he knew in his heart that Jesus had the power to heal in God’s name. In both the Hebrew and New Testament scriptures, there are numerous examples of mercy for the blind, because it was considered one of the most common and debilitating afflictions. Blindness also was understood as a metaphor for the inability to recognize the presence of God. People lived by a detailed list of religious laws, but they were blind to the presence of God in acts of mercy, justice and love. People criticized Jesus for breaking the rules, but they could not see that Jesus fulfilled God’s covenant to love God’s people.

Being physically blind is a frightening hardship. To live in a world of darkness seems like a cruel fate, but to live without hope or faith in the merciful presence of God is a deeper darkness. Sometimes the pain, sorrow and afflictions of people seem beyond what a human soul can bear, but the worst affliction is hopelessness. Bartimeus had faith and hope in Jesus. He was healed, but not by Jesus. Jesus declares that Bartimeus was healed by his own faith, by his gift of insight, by his conviction that Jesus was sent by God to bring hope and healing to our world.