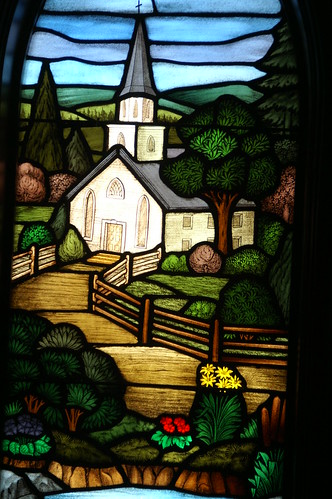 Today we celebrate the 182nd anniversary of St. Luke’s Church. 182 year ago it was Elizabeth Kerr, daughter of Chief Joseph Brant who gave the piece of land for the Church and some of the money raised to build it. So our Church has a deep connectedness not only with the history of the Loyalists who were among the first families of the Church, but also with our Indigenous brothers and sisters who, of course, were the original inhabitants of the land.

We’re celebrating a long history today. It is amazing to think of all of the thousands of people who have been spiritually nourished here and have grown in their faith because of this Church. And the thousands who have made a difference in the lives of others because of the good works that they have been able to accomplish through St. Luke’s. When celebrating an anniversary, it’s natural to look at our past and it’s important to honour it. But, we can’t live in the past.

This Church building in which we stand today has been consecrated to be a place where holy events have been celebrated week by week for all this time. On Friday we celebrated our most recent wedding here. Of course, there have been thousands of those that have been celebrated here. But when I witnessed the couple yesterday exchanging holy vows and with them expressing their deepest hopes for their future together, I could see how God was working in them through the divine gift of love which was evident in their great joy. They were making promises about their future and their faces were full of hope and the dreams that they have for their future.

Another holy event which we celebrate in this Church is baptism. Like at a wedding, it is about making promises for the future about belonging and following Jesus’ path for the whole of a new Christian’s life. When I think about much of the holy celebrations which we do in this holy place, I think about all of the people who have looked forward to their future with great hope, aspirations and promise. Our forebears built this Church looking toward the future. Many of the holy acts done here are looking to the future.

I fully believe that God has a purpose for us as a Church and that we are to grow as a Church, and I’m talking about growth in many ways – not just numerically. We have been growing in the ways we have matured spiritually. We have grown hugely in the ways we have reached out with the love of Christ in service to those in need. God has a bright future for us as long as we live in faithfulness to our baptismal promises.

At an anniversary, it is important (as we celebrate 182 of our past) to  also look to the future with expectation and great hope. But we can’t live in the future.

In today’s Gospel lesson from the Gospel of Luke, Jesus has just returned from his forty days in the wilderness where he struggled with the way he would do his ministry. He has returned and has made an impact in some of the small towns in Galilee – a buzz has started, though in St. Luke’s Gospel we don’t have any details about all of that. In St. Luke’s Gospel this story is the first story of Jesus’ ministry. Here he has returned to his hometown and the words he is about to speak are sort of like his inaugural address. But it’s a very different inaugural address than what you will hear from either Clinton or (heaven forbid) Trump in a few weeks.

The way liturgy was done in the Synagogue of Jesus’ time, a learned teacher – often not a rabbi) would read a piece of scripture, often of their own choosing. They would stand to read the scripture, and then the tradition was for the teacher to sit and give a reflection or give some instruction on the scripture.

Jesus’ hearers in his own home town know the drill. Jesus stands up and reads a prophecy from the past – from the book of Isaiah:

18“The Spirit of the Lord is upon me, because he has anointed me to bring good news to the poor. He has sent me to proclaim release to the captives and recovery of sight to the blind, to let the oppressed go free, 19to proclaim the year of the Lord’s favor.”

So Jesus is referring to a text that was written some 500 years in the past, which was pointing to a bright future. But the temptation with prophecies like this is to think of this as being in the far, far future. An “in the end everything is going to be ok” type of prophecy. I imagine most of Jesus’ hearers thought of this text from Isaiah in this way.

Jesus might have chosen to focus on the past and said something like: “Our forebearers envisioned a world of peace and justice, where everyone would have enough.” Jesus didn’t do that.

Or he might have spoken of the future like: “We, like Isaiah did in the past, look forward to God’s wonderful promise. One day, the poor will be lifted up and people will live in peace.” Jesus didn’t do that.

Instead as Jesus sits down to instruct and the eyes of everyone in the synagogue were fixed upon him, Jesus starts by saying; “Today”

There’s no pining away for what used to be. There’s no wishing for a glorious future. The word is today: right now. Now is the time to act. This is Jesus who preaches that the Kingdom of God is among you: right here and right now. It’s not some pie in the sky for after we’re all dead! It is now! It’s for us today!

And what does that image of the kingdom look like: “good news to the poor, release to the captives, sight to the blind and freedom to the oppressed.”

It’s Jesus’ revolutionary message and message of much of the old testament: that the downtrodden will be lifted up, the outcast will be gathered in. It’s a message about God’s holy love living in us and acting, in the present, to make a change toward healing for this broken world and our broken society.

We must be focused on the present because: now is the acceptable time, today this scripture has been fulfilled in your hearing. Action only ever happens in the present and God is only ever experienced in the present. We must be engaged today in feeding the hungry, releasing the captives and lifting up the oppressed.

What can you do to be engaged in God’s Kingdom through St. Luke’s? Not yesterday, not tomorrow: but today? Amen.
Posted by Stuart Pike at 2:14 PM